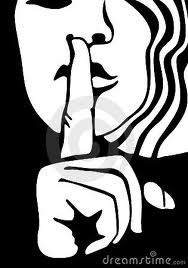 OK, let’s play a game. Who can be quiet the longest? Ready, go!

Who hasn’t tried that trick with an overly vocal child? It seems some youngins never shut up, and I’m the first to say that I was probably one of the worst offenders. I would have conversations with my stuffed animals if no one was around, which typically was the situation anyway since my parents worked, my brother too old to care and the friends in my neighborhood were just a bunch of boys anyway. (No offense, boys.)

A toy that can talk = creepy!

By the time I hit kindergarten and elementary school, it was a different story. I became friends with everyone and loved the social interaction, the giggling and the non-stop talking. My friends and I would make up skits, make prank phone calls and talk about anything and everything. In fourth grade, a group of girls who were my best friends decided one day to ostracize me; that taught me that it was a smart move to be nice to everyone, because you never knew when a friend would stop being one. So I talked to everyone and made many different groups of friends. As a teenager, I had crews in local public and private high schools, from work and from my new neighborhood, which thankfully offered some super-cool chicks to run around with. Naturally outgoing, it was easy for me to say, “Hi, my name is Suzanne. What is yours? I like your shirt.”

After college, I started a career that would pay me to talk to people. As a newspaper and magazine journalist, my job was to ask people questions on a daily basis. I had to learn from them, distill their knowledge and write it in a way that everyone else would understand. I realized that the most important communication skills was listening,

Part of the “girlie clique” – to be honest, I got lost in a vortex of friend photos in an effort to show you that I actually have friends and I’m not bullshitting. I really love my friends.

and during my years at the newspaper, I did a whole lot more listening than talking. After a while, I started to think that many people didn’t really care what I had to say anyway.

In fact, that really is the case. (Oh, you’re reading this! Hey, thanks!) But honestly, don’t most people you know think they know everything and would rather blather on about what they think they know than learn something? Try debating someone with a different political slant than you. I have very few friends with whom I can engage in this sort of discussion and remain friends at the end. That’s because most people I have met know what they know and put a lot of weight in their knowledge. It’s WHO THEY ARE. Today, what you know is shorthand for who you are.

What is knowledge (<– soundtrack alert!), anyway? I mean, how do we know what we know? Is it like obscenity, you know, where “I know it when I see it”? Experiencing things isn’t really a way to gain understanding, because I sure know a lot of people who make the same mistake over and over (raises hand).

According to the yogic teachings, there are four means to understanding:

* Sravana: That’s hearing it straight from the guru. This is interesting in modern-day culture, because sometimes it’s difficult to decide whether your source is biased. How many gurus are out there? I’m gonna put it out there that there are none on Fox News.

* Manana: That’s deep thinking. Like, think about it! Duh!

* Nidhidhyasana: This is constant meditation. It’s not easy to really stop and clear your mind, but that’s an excellent way to figure out your truth.

* Atma-darsana: Hearing it from God. What a fantastical concept, right? Those people are cray-cray, yeah? And yet … aren’t there times when your instinct is so very, very correct? Where do you think that comes from?

Here’s the thing about those four ways of understanding: They all involve being quiet and listening, either to yourself, to a wise one or to the highest spirit. With time, we see how those sources are all the same.

Being quiet isn’t easy in today’s world. We’re a little scared of it! If we are quiet, than no

one will know how amazing we are! We can’t prove our intelligence all the time by spouting off our beliefs, what we’ve heard and what we’ve read! Look, I know ALL ABOUT what you are going to say … I heard it on a podcast the other day!

The 24/7 news culture and social media adds to this. The fear of missing out (FOMO) results in everyone talking all at once: spewing their opinions, what they ate for lunch, how they are feeling, what they are doing. But of course, opinions, emotions, intake and action are not knowledge. There is emotional knowledge, but we get tricked by that more than we want to admit.

Now that I live on a sailboat, I spend a lot of time by myself. Sometimes I listen to music and sometimes I partake in media. But other times I am quiet. Just this morning, I paddleboarded over to the beach to meditate. When I opened my eyes, I saw a little sea slug living in a little gray shell walking toward me. Right at the water line, this little guy was moving slowly and quietly. I wondered where he was going. I mean, really – what was this slug’s end game? There were no places to hide anywhere nearby; was it food? He was certainly on the move. I just watched him. When he reached my shadow, he froze and retreated into his shell. I picked him up and put him on the other side of me and my board and headed back toward the boat.

Sometimes life is really just that simple, just a slow walk along the water’s edge. Survival. We wouldn’t know it with all the noise around us and within us. Being quiet helps us differentiate between the chatter in our heads, the chatter all around us and the knowing. Part of the joy of sailing is turning off the motor and only hearing the waves lap against the hull of the boat. Can you turn off your motor and still find movement?