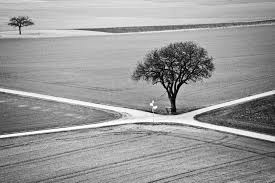 Lingering in the Crossroads

Did you check out the Super Full Moon Lunar Eclipse last night? I sure did! I gathered with some like-minded spirits on my favorite beach (where an Ais Indian burial mound is protected under the parking lot) and enjoyed a nearly cloud-free view of the cosmos.

I have been feeling a big celestial shift happening for a while. I wasn’t really sure how best to identify it, but for so many facets of my life I’ve just been in this complete crossroads (<– obvious blog soundtrack).

When the cosmos is at a crossroads … a lunar eclipse!

I felt I was in the dark of a life eclipse, awaiting the brightness of the other side.

For me, nothing is certain anymore – my life is no longer scripted. No job, relationship, living situation, health status, plans or goals make any sense any more. And I’m not the only one. At least a half-dozen of my friends are in the exact same position. Are you one?

What an interesting feeling, to be in the limin of life. This happens from time to time in our personal lives as well as our general culture, when we, either individually or collectively, walk through a threshold and appear differently on the other side. Some of these liminal moments are obvious: maybe it’s a marriage or decision to divorce. Maybe you saw a family member in a new light and it completely changed your perspective. When you leave an unfulfilling job and leap into the unknown, when you get in your car to move across the country – the limin is a scary and exhilarating place to be.

I’ve been hanging out in the crossroads for a while now, not that it’s what I would have chosen. I’ve been waiting for months for my boyfriend to return from a fun work adventure, having put big plans for travel on an indefinite hold. Now, just about everyone I see says, “Gosh, I thought you’d be GONE by now!” or “How’s life on the high seas?” or “What are YOU still doing here?” All good questions. Was this even a good idea? What exactly am I waiting for again?

And how long is it OK to linger in the crossroads? Not long, I think. I mean, let’s investigate the metaphor: By definition a

The crossroad is a lonely, confusing place.

crossroad is filled with busy traffic. It’s easy to get confused and hurt there. Maybe you don’t know which way to go. You just keep turning around and around, lost. I feel a little that way.

So I was excited for the lunar eclipse. It was such a spectacular and rare celestial occurrence that I figured it had to mean something. The Harvest Moon is the full moon closest to my birthday, too. I felt for sure it would knock me out of the crossroads and just force me on my a path.

It was beautiful. As the moon rose over the sea, it was large and glowed red before it was swallowed by a patch of clouds. But its light shone over the water, broken only by the heavy pound of waves swelling over the sandbar. When it reappeared higher in the sky, it wasn’t long before we watched the Earth’s shadow slowly but surely blacken the orb.

Oh the black. Living in a shadow of your life is a lot like the attics of your life. Due to many factors, I’ve been low and depressed. I’ve spent a little too much time sleeping and hiding. I call it living in the black hole, and we’ve all been there. When I go out, people have these expectations of me, and it feels overwhelming. When I stay in, it’s quiet and still.

I look for advice anywhere I can. My mom would tritely say, “It is what it is” over and over. Now I hear that line everywhere and I cringe at how truly meaningless it is. As if it is healthy to accept that you are stuck in a busy thoroughfare, where a collision is just waiting to occur (or perhaps everyone just zips passed you). For the love of all things holy, MOVE!

A couple days ago, I was accepting my weepy and vulnerable state when a dear friend called. He said, “We’re all worried about you.” How exactly did he know that he was supposed to be worried? I thought my Facebook façade was positive enough, and I was going to Yoga classes and exercising and doing as much as I could to keep up appearances. But he knew: I was lingering in the crossroads too long. I was lost. I didn’t know what to do with myself and my life. So he invited me to dinner, and he and his wife just gave me hugs and let me know it was OK to be overwhelmed by extreme life changes.

You know you’re a local when you understand this intersection. When are we locals in our lives?

In this little town of Stuart, Fla., there is a roundabout downtown called Confusion Corner. There are six roads that flow into it, and there actually used to be more. There also used to be a bunch of stop signs before the city put in the roundabout. It used to be Courtesy Corner, because neighbors would just wave fellow neighbors through. Today, people honk and get mad, curse and shake their head. The other day, a man actually waged his finger at me because I was on a skateboard and stopped, picked up the board and was waiting for him to pass so I could cross the street. That disgusted him.

While people are in intersections – crossroads, limins, whatever you want to call it – wouldn’t it be nice if more people were courteous instead of disgusted? We all need friends to help us on our path, and some days it’s harder than others.

Back on the beach last night, as the moon slowly started to reappear, I stripped to my bathing suit and jumped in the ocean. Swimming around as the swift currents rushed past my legs, I breathed deeply as the passing of time was visible with the moon phases. Emerging from the surf, I took a mindful step on the sand – one step closer to walking the path I’m meant to travel.

Living in the NOW

Yeah, yeah, time is an illusion. That’s such OLD news. I learned that … when exactly? Let’s see – I live in Florida, so, when I learned it there were leaves on the palm trees and it was sunny, and it was warm out. So that was … oh, never mind.

Ever like a photo on Facebook and then suddenly find yourself in the black hole of Facebook photos of a person you hardly know (or know all too well)? One click and suddenly it’s four years ago and there is that person, kissing someone you’ve never seen before, smiling with slightly fewer laugh lines. Was it really four years ago or was it yesterday?

This is me in 11th grade. Or is this me yesterday?

My haircut, skin and weight are basically the same today as in high school and college. Did my 20s even exist? Am I a different person now? Are you?

There are people who hold on to the past. Others worry about the future. It’s hard to know what is really in the NOW in people’s heads and hearts and what isn’t.

I was recently contacted by an ex-girlfriend of an ex-boyfriend. She wanted to get some advice about him, share experiences and hear what it was like to be on the other end of the heartbreak with this particular individual. As I was messaging her, I remembered what it was like to be extra skinny with sadness after that breakup. I remember one day, when I was crying in my bedroom (again), I literally cried out for help. Suddenly, a bright red cardinal flew to the bird feeder outside my window. Then suddenly a blue jay flew in and knocked the cardinal off. To my amazement, a woodpecker flew in right behind and knocked the blue jay off. It was the beginning of my recovery into life in the NOW again. (<– soundtrack alert)

I like to write NOW in all caps because that is when time happens. Breathe. There’s a moment. Just as fast as those birds came and went, that moment is gone. Breathe. There, another NOW. I had a brilliant politics professor in college, Mark Roelofs. He has Parkinson’s and wrote notes on the blackboard in the shakiest of handwriting, and I will never forget him making a giant arrow pointing down on the word NOW. That’s really all that matters.

Literally, I no longer have enough stuff to fill these suitcases. Emotional baggage is, um, another thing.. He has Parkinson’s and wrote notes on the blackboard in the shakiest of handwriting, and I will never forget him making a giant arrow pointing down on the word NOW. That’s really all that matters.

So why is it so hard to let go of the past? That ex-boyfriend, whew-boy, I was hanging on to some baggage with that one for quite a while. Then the next one came along and provided me with all kinds of additional hang-ups. And the next, and the next! Even today, I was talking with my current boyfriend’s parents about friends their age who are single. His dad said, “The thing is, when you reach a certain age, you’ve got all this baggage!” Of course, that statement applies to just about anyone who didn’t find their life-long sweetheart by the age of 20.

How do we stay in the NOW? You just do. Birds fly in and out.

What’s hardest for me is understanding and recognizing when others are still holding on to the past in their heads and their hearts. I struggle with it. I am unable to control whether my loved ones are fully present. Sometimes I feel like I am being cheated on by time. Sometimes I am.

I think it’s true to say that those who have difficulty living in the NOW are not especially thrilled with their NOW. It’s easy to put on those rose-colored glasses and romanticize the past. We were soooo happy! None of this pain that is sometimes just inherent in the present moment. Myself, I can look longingly into the future, thinking some day, yeah, some day. Some day, it’s going to be just perfect.

So it’s not just a matter of staying in the NOW. It’s coming to terms

NOW this is happening!

with the NOW. It’s being happy exactly where we are in space and time. It’s recognizing the lessons of the past and seeing how everything we’ve done has brought us to this exact moment. It’s knowing that everything we do at this exact moment will be propelling us into a future that has yet to exist, but is just as it is meant to be.

Today at the gym, the clock was missing. My trainer said it was running slowly, so he fixed the time. And then it ran even slower. It needed a new battery, so he took it down. Is that all that it takes to stay present? Sometimes we all need a fresh battery, a fresh shot of energy, and it’s easy to get: Breathe in, breathe out.