And just like that – after a year of slowly plugging away on a personal project, something I had to sneak into between working gigs because it wasn’t about making money but sharing a story – I am now a published author with a book title on Amazon. With a click, I went from being someone who says airily, “Oh, yeah, I’m working on a book,” to someone who did it. My book dropped.

In today’s modern self-publishing world, I guess it may not seem like that big of a deal. I’m not like my amazing friends who have agents and publishing deals and New York Times #1 best sellers (damn Amie sets that bar high) … but I’m closer than I’ve ever been. And tomorrow, I’ll be even closer. What does it take to reach a goal? Persistence, effort and believing in yourself. Let’s break it down.

Woo! I published a book!

My book is called Operation Big Fun: The Fest Life Guide, and the idea came to me as I was riding in the back of Jeffrey’s RV with Jody, Joni and Ema after seeing the Allman Bros. perform their last festival show at Lock’n in Virginia. I was a good few states away from my rental home, and the folks I caught a ride with up to the festival decided to “leave early to beat the traffic,” which was perhaps the most ridiculous thing I had ever heard in my life. Somehow, I was able to find friends with a willingness and room for me to join them on their travels home. Somehow, I figured out a way to transport my overpacked belongings across the festival grounds to their VIP RV. Somehow, I ended up having just the very best time. As I was singing along with Joni’s beautiful guitar, lounging on a pile of Mexican blankets with my feet up on the cushy seat, I realized that my somehow wasn’t just chance. I had used my experience, wisdom, connections and skills to make my festival experience the best imaginable. I didn’t quite realized it at the time, but I was divinely guided to share what I knew.

So, with my pen scribbling a draft table of contents as the RV bumped and bobbed along the country roads home, I started my first book. It was just a dream at that time. Four years later, it’s a finished product. A whole lot has happened in my life in those four years. I went to a bunch more festivals and learned a lot more. I also quit my office jobs, sold all my belongings, transitioned my writing career to being completely remote, learned how to sail and lived in 10 different countries (with plane tickets to two more in my pocket!). And yet, this whole time, I knew that if I plugged away at this idea, I could make it a reality. I could be a published author of a book.

About a year ago, I was living in the U.S. Virgin Islands in a studio apartment with a sleepy kitty. I had ended a long-term relationship and writing all kinds of public relations work that was paying the bills but not fulfilling me creatively. I was teaching yoga four times a week, dating handsome men and drinking a little more than I should. It was time. I pulled out that scribbled piece of paper I crafted in the back of my friend’s RV and opened up my computer. And it began. 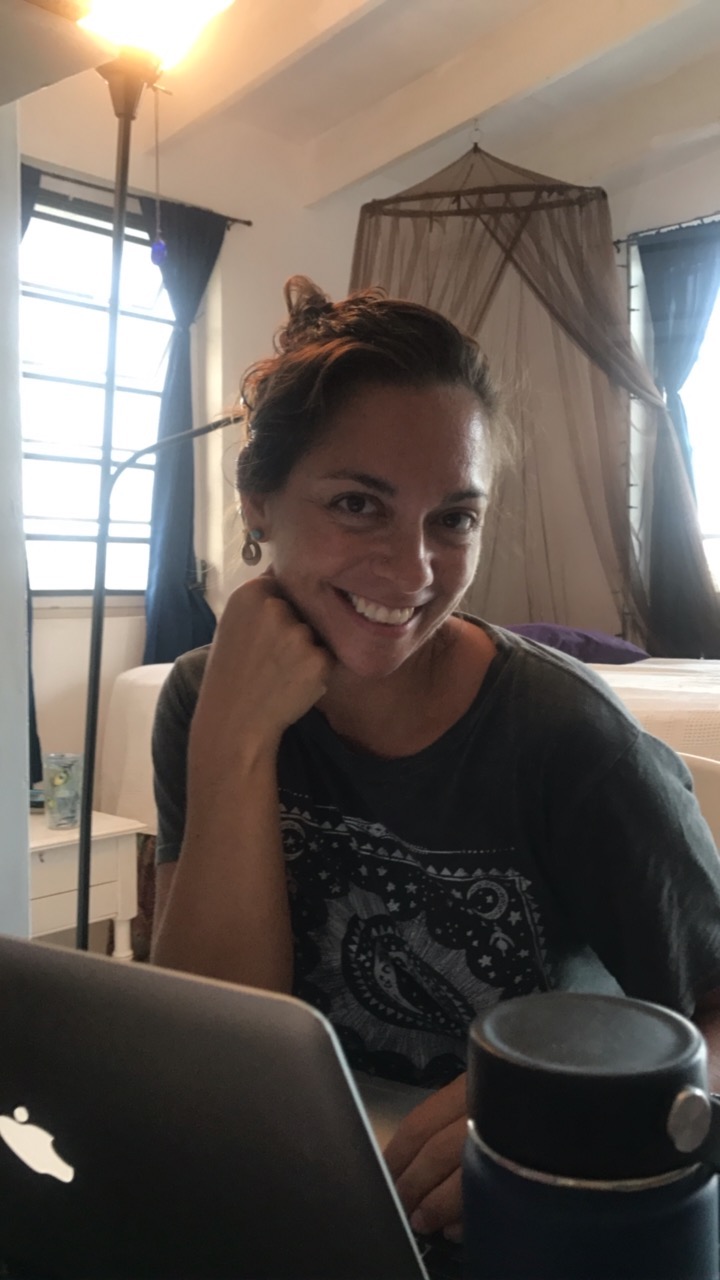 My desk in the Caribbean where I wrote most of the book, evidently with messy author hair. RIP T-shirt.

They say that the hardest part is the start. Once you start something, Newton’s Third Law of equal and opposite reaction takes over. When you pull, it pulls back. The wheel begins to turn. For the less scientifically inclined, it’s as simple as The Secret. You put effort when you wish it to go, and suddenly it’s all you can do.

Well, that’s not exactly true, now is it. There were weeks when I did absolutely no writing on my book. I would be swamped with paid gigs. I would be sailing to the British Virgin Islands. I would be too busy having fun. And then, an angel would appear and say something as easy as, “So, how is your book coming?” or “What kind of writer are you? Do you write books?” It was the stark look in the mirror that reminded me that I needed to return my efforts to what I found important, what I wanted to persist. And so, I sat down in the chair and opened up that computer file again.

And while people may turn their nose up at the concept of self-publishing, the end result is a lot harder on the author. Not only did I have to write the best piece I could, I had to find the pictures that I wanted to include. I had to find a designer who could execute my cover concept. I needed to learn how to format a book for a Kindle and then format a book as a paperback. I needed to learn every aspect of the process, something that authors who have publishing companies just pay someone else to do. Since I have a background in marketing, some elements were easier than others. But I had to put effort into it all to make it happen.

The most helpful thing – besides YouTube, of course – was my friends, both new and old, who asked me about my book. My mother often asked me about the book, and who knows how she’ll actually feel about it … I had to send her a note to warn her about the sex, drugs and rock ‘n’ roll in it. She might not like the book, but I know she likes me. And, so do I. I knew I could do it.

As I travel and live outside my comfort zone on an almost daily basis, I have to constantly come back to the concept of being my own best friend. I knew I could write a book. I knew I could live in a country where I didn’t know the language. I knew I could get on a scooter today and drive it further than I ever have driven a scooter to get myself to the coffee shop in Chiang Mai, Thailand, where I’m writing this blog post.

Of course, I’ve had my setbacks with everything. A few weeks ago in Malaysia, I was working out and fell down, scraping my knee badly and crying about how alone I was. But I ended up slapping a bandage on it, calling a Grab and teaching a great yoga class less than an hour later. Same with writing: Some days, man, you gotta slap on that bandage and keep on going.

I have always been a writer with ridiculous hair.

Why? Because there’s a trick to being the kind of person who says they’re going to do something and then doing it. And the trick is persistence and effort. The trick is in the doing, not the dreaming. I see this a lot with people who want to work remotely. They dream of it, but then don’t put in the effort, persistence and belief in themselves to make it happen. For me, I knew I could “try” to write a book, or I could just do it.

And what now? I have a plan to share my story with as many people as possible, but again, this isn’t about money. This isn’t about fame. This is about me being 7 years old, sitting at my little desk in my Pennsylvanian bedroom, digging my little toes into my green shag carpet and sticking my tongue out in concentration. That was when I realized that I am a writer. I am a poet. I am journalist. I am a copywriter. And now, I am a book author.