Almost every day, we are asked a version of this question: Who Are You?

Yes, I’m definitely not a male … unless you are referring to when I was a little kid and my working mom, in an effort to save time, would have my hair cut like a little boy’s. I remember that time in the convenience store when an older man mistook me for a boy.

Tomboy, the magazine. Talk about a niche market!

I’m a writer … but then I guess I’m also a dancer, a singer, a drummer, an artist and, sometimes, a reader who enjoys just chilling on the couch.

I’m a yogini, sure. But sometimes I drink alcohol. Don’t tell the coffee fan part of my personality about that!

It’s really a lot of the work we do as humans, trying to answer that question. As someone who travels frequently, lots of people ask where I’m from, as if I identify with that. I usually reply, “Oh, over there,” and point to the sailboat where I’m living on the water. Do you really need me to explain that I was born in Pennsylvania, then I lived in New York City for a while for school, then I moved to Florida … I mean, as if that has anything to really do with who I am!

Sure, some people do identify with geography, rooting for sports teams and keeping an accent long after leaving. But that’s not me. I honored all the places I’ve lived and visited, but those places aren’t me.

Lately with the inauguration, people are identifying with their political bent. So often I

Sports fans … when you are depressed because someone else lost a game across the nation, you may want to reevaluate your concept of identity.

encountered someone who was so steadfastly confident in their point of view that they refuse to even entertain a different one. They are placing their entire being in an American political party; while I obviously have a point of view, I don’t identify so strongly with a side that I wish ill on the other side.

It’s so easy to separate from others when we try to figure out who we are. We’re not this, we’re not that. And then it’s a slippery slope, isn’t it: I HATE that, I LOVE this. You are wrong, I am right. Period.

But life really isn’t like that. There’s black and there’s white, and then there is finding joy in the gray. In college, while in the midst of an uncomfortable conversation with two troubled roommates who decided to drop out of college and get their own apartment without me, I was accused of “living in a world of absolutes.” It took me a long time to know what the hell she was talking about.

I guess she was right. At one point in my life, I did find it simple and easy to identify with labels: Phi Beta Kappa, Lacto-Ovo Vegetarian, Deadhead. It’s handy shorthand to say stuff like, hey, I’d like the tofu veggie dish, please. But as I started to drill down the concept of my own identity, many of those labels started to unravel.

Sure, I still love Jerry Garcia’s guitar skills. But I don’t own any more tie-dye. I ate fish last year in an unsuccessful attempt to, well, eat fish. I’m smart but damn if I can get my emotional intelligence on point! Exactly who do I think I am?

In yoga, it’s actually pretty simple. I am you. Yes, you. Every single person (millions! Haha) reading this blog post. I am a loving being who is lovable, unique and beautiful. Think you know someone who isn’t? Chances are they’re hiding a part of who they really are. That’s why it’s so important to be kind to every person and view each interaction as an opportunity for growth.

I recently had a very interesting interaction with a fellow yoga teacher who ended up lying to me when she changed her mind and asked someone else to take over her classes. It’s certainly her prerogative as an independent business owner to change her mind, but a yogini being untruthful spun me. I had to confront my own reaction to it and determine what I could learn. I realized I needed to be more professional when asked to commit my time; I knew I was trustworthy, so I simply put the dates in my calendar and called it a day. But she did not know that I’ve never missed a yoga class.

I realized that I need to look closer at my own truth, too. Part of that includes understanding who I am and accepting others as part of who I am. This means increasing compassion, or, as I like to say, digging deep into that endless pit of compassion we all have within. Just when we think we’re hitting the bottom, there’s more down there. Just keep digging, and we’ll discover how similar we truly all are.

OK, OK. So the first thing you’re going to realize is that this blog post has been shared on social media. And here is a whole blog about taking a break from social media! IT MAKES NO SENSE … or does it?

I have been feeling at a loss lately, with the new year now just a couple days in. So many people I knew and loved were undergoing big, beautiful changes in their lives. And yet, I felt stuck. I already made big changes, having sold all my stuff, left the small town I was living in and loving, said goodbye to so many wonderfully supportive friends. I went 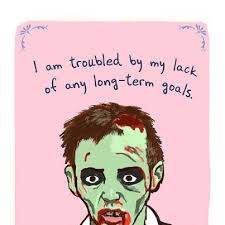 Buddha says, our problem is that we think we have time. Unless we are a zombie. Didn’t think of that, did ya Buddha?

sailing, traveled and lived in places I couldn’t have imagined just a couple years ago. But now what?

So often, when one completes a major project – like organizing a wedding, getting ready for a baby or making a move professionally – there’s a bit of a letdown when it’s all over. We did all this busy work, and here we are: still in our own skin, still looking at ourselves in the mirror.

Four years ago, a five-point personal plan came to me during meditation. I was working for a small government agency that was up for referendum. It was a make-or-break vote, and it was my job to get it passed. No pressure, right? I realized that if, due to the will of the Gods, it didn’t pass, I would be personally and professionally destroyed. I couldn’t let that be. (It did, by the way!)

So I created a plan to create skills and set myself up for success. First, I would renew my real estate license. I was debating it, but I figured what the heck. That was easy; the 40-hour class was completed online over a weekend. Next, I decided I would become a Reiki Master. I had worked with Reiki energy for about a decade at that point but only at the second of four levels. I was being called to teach. Along those lines, I decided to get my Yoga teacher certification. Step four: “Something with food.” I decided to try veganism

and am still interested in returning to this challenging diet and sharing vegetarianism in a meaningful way. And the final step was to figure out where I wanted to move, and move there.

Done and done. I am a Reiki master, Yoga teacher and marketing professional (The real estate? Not so useful) living currently in the Virgin Islands. I’ve catered vegetarian dinners and committed to intermittent fasting for the last 10 months, and it’s helped me feel better and heal my relationship with food. So, now what?

Even as it allowed me to connect with those who loved and supported me, Facebook was just not helping. I was endlessly confronted with people gloating about the election or, from the completely other side of the spectrum, happily ignoring politics as they showed off their beautiful, loving families. So many of my friends got married, got engaged and had babies this year. I’m truly, truly so extremely happy for them.

But as studies show, Facebook was giving me an opportunity to compare my B-roll with

When the most meaningful interaction is a frown face emocon. Ouch.

everyone else’s A-roll. And I’m sure others felt that way about my news feed. I felt like a fraud, acting completely happy because I was expected to. Crying a snotty mess during a fabulous deep tissue massage last week, I knew something big had to change.

So I made a move: No more Facebook. I shared my contact information (It’s thelovelightproject@gmail.com! Connect with me!) and took the app off my phone. I’m simply not checking it any more. As a marketing professional, this feels weird, but stepping out of the comfort zone is exactly what helped propel me into the next stratosphere of life last time. Hopefully it will be the first step this time.

With the time I would have normally spent checking social media, I am starting to create other plans for 2017. I’m going to do things that bring me happiness: writing more, cultivating my independence, doing more Yoga and meditation, rediscovering my own power. I am hopeful that by making space in my life, releasing myself from my own news feed of life, I will increase my capacity for good – for everyone, not just me. Then perhaps my break will, in turn, bring more happiness to others. Now that is a resolution I can get behind!