On Craving What Is Best

Wow, French fries are delicious. Seriously, I ate some fries the other day at lunch with my friend Susanne, and they were so great! Seasoned just right, crispy on the outside and a little soft on the inside. They held up great when dipped into a big dollop of ketchup and complemented my black bean burger over micro-greens perfectly.

French fries, while yummy, sure aren’t considered healthy. So why is it that I am so quick to order them at a restaurant? It’s like that big bowl of Halloween candy on the counter where I buy my coffee some mornings. I do

Mmmm …. everything bad for me ……. Gahhhhhh

not need a Reese’s peanut butter cup, so why is it so hard to resist one? The beer my boyfriend just offered me is another example.

Why are we so attracted to things that are not good for us? How could something so wrong be so right?

On the face of it, it really makes no sense that we humans would crave things that are bad for us. You would think that I would be like, “Man, I could really use some spinach because I’m feeling low on iron right now.” But that never really happens.

Of course, this attraction to the “bad” doesn’t just stop at food and beverage. Relationships can certainly fall into this category, as well as general habits. Isn’t plopping in front of the television a really attractive concept on some days? Ever get a massage, only to have those shoulders tight again almost immediately? It’s like we WANT what is clearly not good for us.

Why don’t we naturally want to honor our highest self? Why is it so difficult to do the right thing?

This summer, I went to the gym a lot. My boyfriend was away doing his own thing, and I needed some activities

to fill my time in a positive, healthy way. So I joined a group training session at the gym, started running the bridges and committed to a generally healthy diet. I learned something: I probably would never have otherwise done squats unless someone was yelling at me to do so. And yet, after I did hundreds of them, my body changed for the positive and I felt a lot stronger. You would think that I would naturally love doing squats because they were good for me.

That’s the thing. Squats, like other forms of hard exercise, are designed to break you down, literally. You are breaking down your muscle tissue so that it can regrow bigger and stronger. And it sucks! Humans tend to operate in homeostasis as often as possible. Change is difficult, so even though change is the best thing for us, we avoid it. We are adverse to it, rather than attracted to it.

So this may be part of the answer for why we like things (and people) that are bad for us. We need to numb ourselves. Even though it’s not healthy to work those long hours in a stressful job, we do it – in part because it numbs us from addressing what is truly important in life. (<– Without love in the dream it will never come true!) Junk food does not really nourish us, but the fat and sugar will numb us. All of this, especially alcohol, helps us live in a state of denial.

It’s attachment. We are attached to things that we think will make us feel good. And yet the attachment itself is the root of so much suffering.

It’s almost as if the attraction to the things that are bad happen as a result of the perversion and pollution that we do to ourselves in this life. If we never ate sugar, we would never crave sugar. If we never suffered from feeling unwanted or hurt, we wouldn’t seek attention from those who are emotionally unavailable or abusive.

So, how do we get back to our good nature? How can we start directing our lives so that we bring in the things and people who are good for us?

The answer, of course, is inside each of us. What are we numbing? I mean, really – be honest with yourself. I knew exactly what I wasn’t interested in feeling for the moment when I grabbed that piece of candy from the Halloween bowl. Did that Reese’s cup make me feel any better? It did not. Did those fries make me feel any better? They did not. Would I likely eat both again? You betcha.

When I was a teenager, I considered working as a nanny for a summer … until the family showed a woman riding a man on all fours across the Jerry Springer stage to their 5-year-old.

It takes a long time to accept that the norm isn’t working. My friend Holly and I talked today about the joy of giving up reality television. It was more than a decade ago for me. I just realized one day that the shows that were attracting me were not really that great for me. So I stopped. I now no longer own a TV at all. Some things are easier to let go of than others.

I am working on letting go of negative thinking, of fear, of using anger to mask my true emotions, of limited thought processes, of not honoring my own beautiful self worth, of not being a completely authentic me. These are all things that I sometimes tend to do, strangely. I am working on eating cleanly, not drinking a lot of alcohol, being active and loving everyone, even those who threaten me or misunderstand me.

Rejecting cravings is really the only way we can release ourselves from the trappings of this life of suffering and transcend to happiness. Happiness? Now that is something worth attracting. 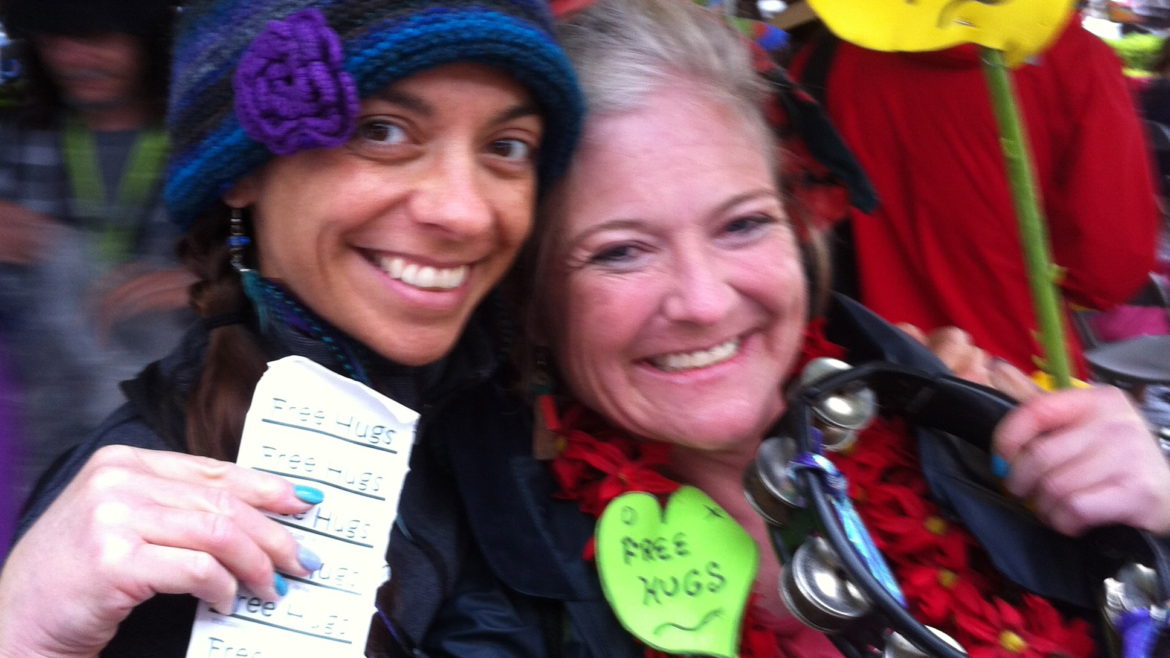 One of my favorite Yoga teachers, Scott, once started a class by asking everyone if they were happy to raise their hands. Lots of us did. Then he asked the sad people to raise their hands, and one or two did. But really, there is a lot to be sad about. Have you read the news lately? We are not short on tragedy in this world, and often in our own little worlds, too.

Scott’s point is, of course, beyond just owning up to the realities of our feelings. It’s actually feeling them. My boyfriend said to me recently, “You feel a lot.” And it’s not because I’m a girl and we aren’t as afraid to express our emotions. It’s because I’m feeling my feelings these days.

Free hugs! Be supportive of each other and get ’em right in the feels!

It’s so easy to hide from feeling; it’s actually part of what makes our society what it is today. I remember when I was a newspaper reporter; parts of that job were really rewarding but all the time it was stressful. I used to come straight home and open a bottle of booze. Alcoholism was fairly institutionalized within that industry. My friend’s back bothers him; it’s a lot easier to smoke some marijuana medicinally than be disappointed by another doctor telling him to take pain pills or have a surgery he can’t afford. Love life not perfect? Pop on the television and grab some junk food, and you’ll be numbing it out in no time.

I spent many years being comfortably numb (soundtrack alert!). It’s not even something you think about. But we all want to be happy, right? We Americans are all about the pursuit of happiness, and what does that really look like? What does it feel like? I know when someone does something really nice for me, I get a warm, fuzzy feeling in my cheeks and up the back of my neck. I try to let that feeling linger as long as I can, but it’s never more than a moment. The rest of the time? Well, people aren’t always so nice, are they. Sometimes they are selfish, stupid, wrong-headed and even cruel with bad priorities that negatively impact your life. No wonder you want to hide from your feelings.

Lots of things are set up to stop us from feeling, but most of all it’s the sociological pressures to be all good all the time. Only lately have I had the confidence to stop with the superlatives. How am I doing? OK. I’m OK. Even though when I reply, “I’m really awesome!” that makes people smile. I like to make people smile too. It makes me smile. But lying to ourselves is about as basic of a numbing technique as you can get. What are you lying to yourself about?

It takes courage to feel your feelings, because sometimes they’re not very pleasant. I’ve been owning up to a lot lately, just because I’m giving myself no other option. That means sometimes I cry. Sometimes I don’t express my emotions appropriately because it’s hard to express anger, sadness and doubt when you spend so much of your life acting like it’s not there. It’s OK to feel bad. It’s like the song I learned in second grade: It’s alright to cry, crying takes the sad out of you! (<– IF YOU CLICK ON

My kitty has been a sweet support during some tough times! I love my kitty!

After a while, I’ve found that by feeling your feelings … by really accepting and processing your emotions through your body … they start to simmer down. If there’s one thing I learned about owning a composting toilet, which can be prone to fly infestation if not maintained, is that DENIAL DOESN’T HELP. It just doesn’t. Clean that shit out. Really.

Really hitting home with the feels, however, does help. You become a more honest person with yourself. You start to understand yourself better. This summer, I’ve really come to appreciate and honor my vulnerability and my need for love and help. It wasn’t too long ago when, nope, I can do it! Like a toddler saying those words while trying to, say, pour milk. Oh geez. Someone help that kid. Because like with kids, when we ask for help, we get it.

That’s been the most wonderful thing about my last few months. Now that I’ve felt more comfortable asking for help, suddenly people want to help me. I have surrogate parents and siblings by the handful, friends who relate to me and give me loving advice. The world is filled with brothers and sisters wanting the best for you.

Even today at Publix, the guy bagging my groceries told me I was making a fashion statement. I asked him what the statement was, exactly (I was hoping it wasn’t “I just rolled out of bed”), and he froze. He said, “Your bag is nice.” As we walked out to the car, he told me that not long ago he saw a young woman about my age who looked pregnant. He asked her when her “blessed event was due” and the woman burst into tears because evidently she had just had a miscarriage. Well, poor guy got called into the manager’s office, where he was instructed to only talk about the weather. Isn’t that sad? Well, on many levels, but it’s sad that we as a culture are scared to feel. Too bad that woman couldn’t have turned to that nice man and cried on his shoulder for a moment. Because he really seemed upset by hurting her, and he looked like he would have comforted her. Sometimes we need to feel so that we can be comforted.