Yogini On The Scene

And the birthday celebration begin! 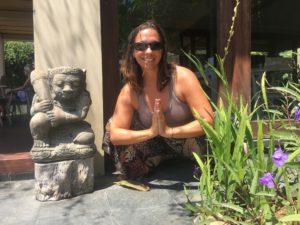 Namaste! Feeling pretty awesome at the start of the Ocean Yoga Festival in Amed, Bali

During my month while teaching yoga in the peaceful and quiet beachfront town of Amed, Bali, I stumbled upon a friend of a friend on Facebook. She is a fellow Reiki master and yoga teacher, and so I offered to connect. She said, “We should meet up at the Ocean Yoga Festival!” Turns out, some cool folks decided to organize a free yoga festival right in the very town where I happen to be living, right over my birthday week! I was over the moon!

Kicking off this morning and happening all this week, the classes and workshops are spread out over the five kilometers of Amed, a coastal town that stretches from one breathtaking bay to the next. I’m staying at the lovely resort called Meditasi Bungalows, which is just enough outside of town for me to be the only Western person jogging. This means, by the way, that all the locals who are sitting outside their homes in the shade give me thumbs up and encouragement as I run past them in the sweltering heat. 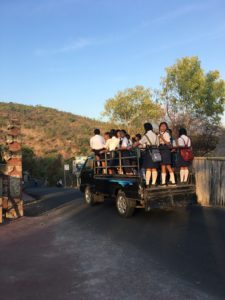 A slice of life: the School Truck in Amed

Amed is different than the other towns I’ve lived in on Bali. Ubud, famous for its aptly named Yoga Barn, has as epic statute of Arjuna in the midst of battle – a feeling you’ll understand as you fight through the nearly overwhelming traffic in its narrow streets as you surrender to the idea that you may be late for yoga class (I never was, but I did get my shoes stolen there. Insert karma here.) In Canggu, there’s a lot less yoga and a lot more surfing – as well as its share of drunken tourists and endless smoothie bowls (Best Smoothie Bowl Award goes to Bali Bowls!). But Amed is simply authentic.

On the way to the first event of the festival this morning, I drove my scooter past little girls in maroon and white uniforms, complete with matching caps and pigtails, holding hands on the way to school. I saw fishing boats dotting the horizons and then using the fresh breezes to spinnaker their way back to shore. Women with pretty sashes tied around their waists squatted to place colorful offerings of gratitude and burning incense outside their doorways. I loved this town even before a free yoga festival arrived.

The first class that I took this morning was an Early Bird pranayama class taught by Matthew of Blue Earth Village and Apneista, who came up with this whole awesome festival in the first place. His big yoga space overlooks a clear view of Mt. Agung and some smaller but equally awesome mountains in the distance. He led a group of about 15 or 20 yogis – (I was impressed by the turnout; it seemed pretty early when my alarm went off this morning) – through alternative nostril breathing, bhramari breathing (humming bee breath) and kapalabhati breath, which is also known as skull shining breath. The most amazing part of the class? Realizing that I hadn’t had any coffee yet but was feeling energetic and ready for the day! 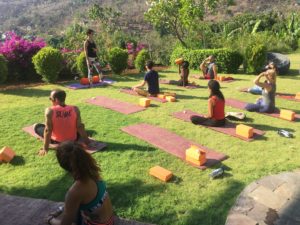 Getting ready for a sweaty class on the first day of the Ocean Yoga Festival. At one point I stacked my blocks to block out the sun. Get it? I blocked out the sun. Ha!

On the way out, I saw a yogi looking a little lost, so I gave him a lift on the scooter to the next class, taught by Anastasia at the beautiful The Griya resort another five minutes or so back toward Meditasi. With the sun shining brightly (and a little hotly) over the water, she led us through an Intuitive Flow. We focused on moving in a way that honored what our bodies were telling us. “Listen to your body” is fairly regular yoga blah-blah-blah, right … and yet, through the practice I realized how easy it is to use your mind to decide what your body is telling you instead of really feeling your body. It’s a sneaky mind trick to translate your body’s language, and it’s one that I do All. The. Time. I could hear my body saying, “Slow down, Suzanne. It’s the week of your birthday!”

As is my bad habit, I dutifully ignored myself as I packed up and headed to Hidden Paradise, where I’m about to give a lecture on Holistic Health and Energetic Healing. After that, I head back to Blue Earth for a Roll & Release class (mmmm … myofascial!). I duck back to Meditasi to teach a yoga class for those who are staying over on that side of Amed. And then – a whole week of yoga ahead!

My birthday week couldn’t be any more different than last year, when I was living by myself (with the company of a sweet cat and an even sweeter dog) in a farmhouse along the Rio Diamante in a small village in Argentina. I spent my birthday last year drinking Malbec, building a wood fire and taking a long walk. This year, I’ll spend it practicing yoga and laughing with new friends along the beach in Bali. 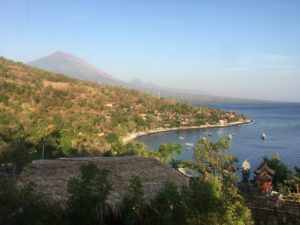 My perfect morning view in Amed

I’m so grateful to be the Yogini on the Scene! I plan to post updates from the festival throughout the week, because it’s going to be such fun! It’s completely free, but there will be plenty of donations raised for good causes: helping the children of Amed, first aid and emergency relief, recycling efforts and pet health. You can read all about it on the Blue Earth Village blog. That means the entire festival is yet another practice in Karma Yoga, which may be my favorite kind of yoga to practice day in and day out. See you on the mat, yogis!