Yogini on the Scene – Day 3

“It feels so good here.” 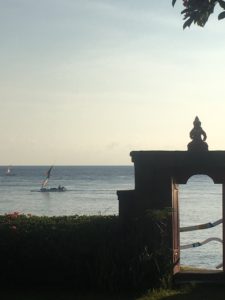 I was talking with Carla, a woman from Mexico, living in Thailand, who was staying in Ubud when she heard about the Ocean Yoga Festival. We had just finished an Open Heart Meditation and were lingering at The Griya. She was talking about how good the festival’s overall vibe was. Was it Amed in general, with the lack of traffic or massive influx of tourists like in Ubud or Canggu? Was it the energy from the ocean or the sun reflecting off Mt. Agung? No, I said: It was trickle-down karma.

Unlike any other festival that I’ve been a part of – and I’ve been to lots, just check out The Fest Life Guide to read my wisdom from a decade of music festivals – this one was organized by a group of people who simply wanted to give back. No one was getting paid. No one was even volunteering. Everyone was just sharing their time and energy to create something for the benefit of the participants, the community and, hopefully, the non-profit organizations that had donation boxes scattered around at the event’s many locations.

In Indonesia, like most places around the globe, the government is understandably strict about the fact that you must have a specific visa if you are working. This includes anyone who wants to volunteer for an organization or even tries to barter. It’s why I still get the bill for my room even though I’m sharing my love of yoga with fellow residents of my guesthouse. I just love practicing and sharing yoga, and somehow, I stumbled upon a town with people who feel the same way. 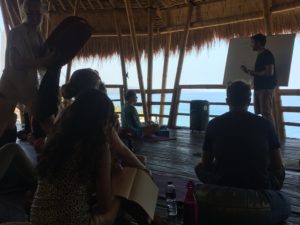 The people who are organizing the Ocean Yoga Festival make up a collective of locals and expats who simply wanted to share their knowledge with the community, free of charge. By steering clear of the normal money-based system, (where, you know, yoga teachers have to eat too) they were able to put together an event designed to simply to help others.

This, believe it or not, is actually yoga. It’s called Karma Yoga. It is a specific branch of yoga, in which people connect with their highest selves through what is known as selfless service. That is, no one is expects to get anything out of their work except for, hopefully, a little better karma. The SUP Yoga class I’m teaching tomorrow? I’m just sharing a form of asana practice and exercise that I really enjoy. The Reiki and Life Coaching session I ran earlier in the week? I didn’t get anything out of it, except for the good feeling I had when one of the women asked if she could take a picture of my white board of notes after adding a page of scribbles to her notebook as I talked. Maybe what I was sharing would help her live her best life. That’s all I want for anyone. 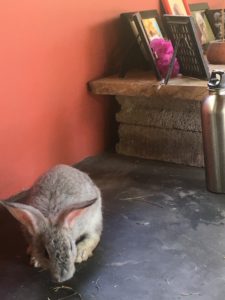 Rabbits took over my yoga class, presumedly to protest the fact that there are dog, cat, cow, crow, crane, lizard and cobra poses but no bunny pose.

See, it feels really good to serve others.

But I’m barely involved. There are others who have put in a lot of effort to pulling this off. And even though they didn’t care about the outcome, so far this free festival has been awesome! This morning, I took the long and rocky road back to Kelapa, a surprisingly lovely resort hidden well off the main road, for a slow flow vinyasa class. A bunny hopped in as we were settling in, and then while in Tree pose a kitty scrambled under me. Don’t climb this tree, kitty!

Afterward, I drove over to Blue Earth for a coffee and ended up talking with a woman who was also a fellow journalist who was considering becoming a life coach. She talked with me about some of her concerns and obstacles of working as a coach, and I had to laugh: She was saying the exact same thing that I did before I started working with clients. I told her, “I’m just two steps ahead of you on the path, but not for long. You’re about to surge ahead!”

Then, after dropping some rupiah in the donation jars, I walked up to the lecture on natural bio-hacking. As someone who loves a good cold shower, intermittent fasting and a bunch of other new-agey bio-hacks, it was great to remember the simple powers that facial expression, posture and breath have on your daily life.

I hopped back on the scooter to the Open Heart Meditation, where the facilitator actually used the words, “Let your heart and body dissolve into the love and the light. Enjoy the process and smile.” Love and light? Enjoy the process? Smile? She was speaking my language! I call my life’s work The Lovelight Project, and anyone who knows me knows that I love to smile. And everything, oh everything, is in process! After the meditation, I felt even better than I did all day. 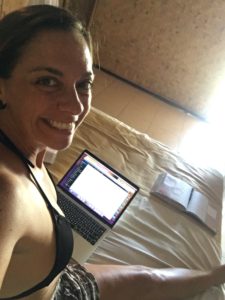 Tonight, there’s a kirtan I plan to attend, and tomorrow I’ve got a bunch more things circled on the schedule. I’m so grateful to the collective of people – many I consider my new friends – who are making this week happen. They’re not getting paid. They’re not doing anything but sharing what they love – and I love that too.

So, on behalf of every yogi and yogini on the scene here, I’d like to say, “Thank you!”