OK, so I write this entire blog post about life is magic and everything just falls into place when you believe in the universe and blah blah blah, right? Well, no less than three days after I post it, the universe decides – oh, tricky universe! – to challenge me! Can I believe the magic? Can I believe my own crap?

The answer is always YES.

YES! The answer is always yes.

So, yeah, the captain who I was going sailing with had what I can put gently as an existential crisis and decides he no longer wants to sail south down island, toward Panama, through the canal and across the Pacific Ocean … at least not any time soon. Sure, I could have moved on to the boat, but it wasn’t really leaving St. Thomas. And it’s a big bad world out there. My wanderlust was bubbling up and fast.

I had already found a new tenant for my apartment (well, after the first girl flaked out on me and got me scrambling and remembering the magic). I was pretty stoked at the idea of getting my entire security deposit and last month’s rent back in cold hard cash. It didn’t make sense to back out of that, even though I didn’t know where I was going next. My friend, who was out of town, had let me use her car while we were both tag-team house-sitting for her friend. So suddenly I had all my possessions, which were packed in a way that made sense only to move on to a boat, in the back of her Honda. And I, for all intents and purposes, was homeless.

But not a sad, oh no, poor Suzanne homeless. It was actually OK. Because I decided to collaborate with my mind and believe my own crap!

I stayed for a day or two with a friend, then I stayed with another friend who lived in St. John during their Carnival. Then I headed over to the friend who let me borrow her car; she was moving into a new place and needed help unpacking, putting furniture together and running errands while she also started her new, fast-paced job that involved a big learning curve. It was (well, is) a mutually beneficial situation, with her letting me crash in a corner of her living room as I worked to reduce my possessions by selling, giving away and digitizing. And in between getting my life down to whatever I can carry, I did her laundry, ran her trash to the dumpster and organized her new apartment, which overlooks the ocean on a peaceful hill swarming with iguanas and birds. 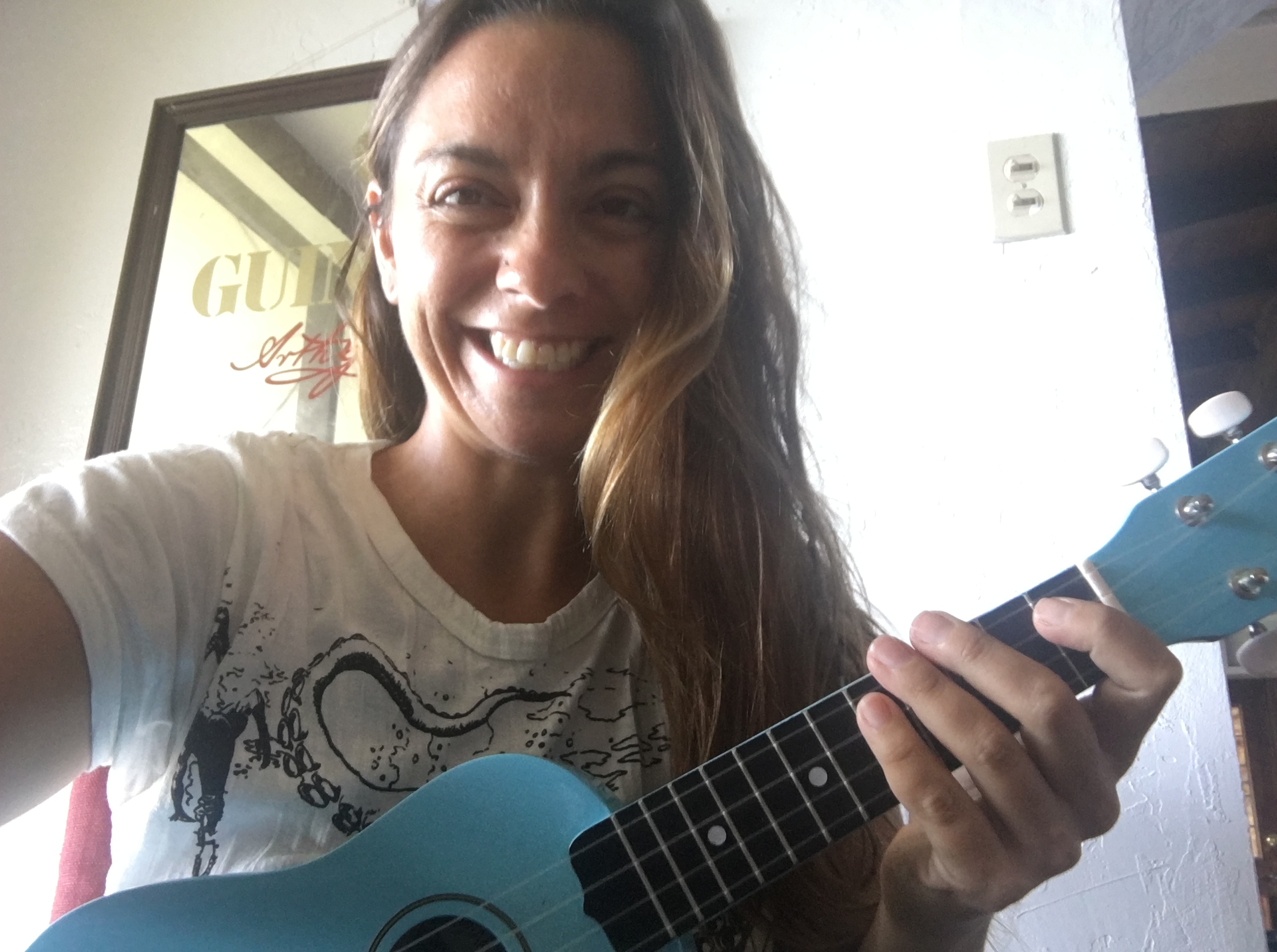 From the DVD: Suzanne’s Guinness Mirror Music Practice When Really She Should Be Working

And she let me borrow something else as well: her ukulele. It was the first time I had ever picked up a string instrument with any sort of attempt to play. I’ve played percussion for a while and have always loved singing (hey, I was even lead in a musical!). I grew up as my brother played guitar, and my mother is even taking guitar lessons now. But I never had music lessons. But just watch how that frowny face turns into a big smile. A literal changing of the tune!

So even though some (cough:family) may fear the universe is kicking me around – and even for a day or so I thought the same thing – the reality is that my crap remains true: This is all happening exactly the way it’s supposed to. I needed time to divest (even further, if you can believe) my possessions, to further gain independence and find a new something in my life that brings me joy and confidence.

What’s next? That’s the $64,000 question that everyone is asking me. I know it’s a rad adventure, I’ll tell you that. I’m guaranteeing smiles for miles! But in which direction? Ah, faithful readers know: It’s however the wind is blowing.