I’ve been traveling quite a bit lately, having touched down in four countries since the last blog post. (The customs officer in the US said, “Are you traveling for business, pleasure or to just find yourself?”) Currently in New Zealand, I spent yesterday in a kayak roaming around the Milford Sound in the majestic Fiordland National Park. Waterfalls splashed down from

the heights into the cool waters below, where seals frolicked and showed their teeth around my vessel. Gulls, shags and paradise ducks rode the winds above, as snow-capped mountaintops gleamed from beyond in the sky. The massive rocks dwarfed everything around them and played tricks with the mind’s concept of distance.

While most of these epic mountains were covered with lush, green trees, there were some sections that were stripped away clean due to recent rock slides. My kayak guide explained that once an avalanche occurs, moss will begin to grow on the rock. Once the moss is thick enough, beech saplings will take hold within the spongey material and start to grow. Once the trees get big enough, they begin to grow roots long enough to intertwine with the trees around them. Together, the trees help each other grow while the moss creates a foundation on the otherwise treacherous ledge. It is a literal network of support.

While traveling, I have found that beech trees on mountain sides are not the only ones benefiting from a support system. Time and time again, I have met people who can

Looking for – and finding – angels everywhere

only be described as angels. These are people who appear exactly when I need them to, eliciting comments from me such as: “I really don’t know what I would have done without you.”

Just recently, two friends and I were hiking – walking, as the Kiwis say – through the bush on the mountains behind Akaroa. This sweet French town in the outskirts of Christchurch was the perfect place for a steep hike, and our plans were to end exactly in time for a happy hour glass of wine accompanied by a live pianist. We stopped by the information center, took a picture of their simple map and set out for the Purple Peak. We passed waterfalls and hiked high enough to unveil beautiful vistas overlooking the harbor. Wildflowers lined our path, and my friends humored me by slowing whenever I felt my heart beating out of my chest. We were about five hours into the hike when we came upon the Visitor’s Center. As we had followed signs to arrive at the Visitor’s Center, we presumed it would be near where we parked the car. As it turned out, it was about 8 kilometers away.

My legs already starting to burn, we hiked out to the main road and began the long, hot walk back to town. About 10 minutes later, a man in a campervan drove our way along the otherwise desolate highway. He stopped and offered us a ride, which ended up being even longer than we could have imagined. He saved us at least three hours of walking along a paved road. He was, quite simply, an angel.

There are so many examples of this. The man who shepherded me to the bus station in Buenos Aires during the airline strike. The neighbor who accompanied me to my hostel in Cancun after I found myself walking in circles with an increasingly heavy pack, searching in vain when my map proved erroneous. My friend in the Virgin Islands who let me borrow her car and sleep on her couch when I found myself homeless due to, in 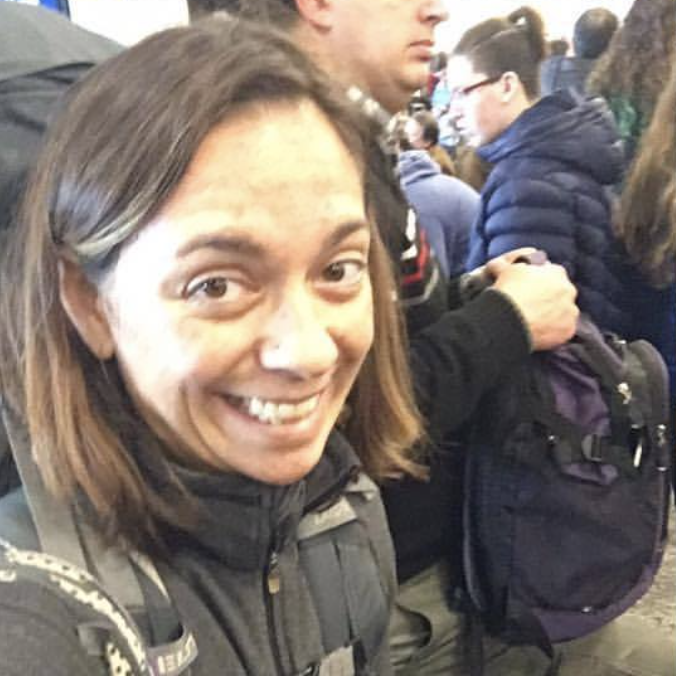 This is me “NOT FREAKING OUT” with a huge pack, thousands of people and no flights out of Buenos Aires. It’s easier to relax through life when you know angels are here to help.

retrospect, the most fortuitous chain of events. The couple here at the hostel in New Zealand who left me with $20 worth of delicious food before they left. The man who gave us a lift two days ago to the petrol station when our car broke down. A friend who reminded me that there are good, good men out there with open hearts. I need these people in my life. I need to hear what they tell me. They appear with divine timing, with divine guidance.

All these people are fellow beech trees, intertwining their roots into mine, helping me stand tall on a soft bed of moss. We lock elbows together, shine our hearts forward and march forth into this wild world. The more I look for angels, the more I find them.

I read Angel Cards. These are oracle cards by Doreen Virtue, a new age-y intuitive type who has many different kinds of these tarot-style decks. As I was packing up to begin adventures around New Zealand, I couldn’t find my deck. I must have left it in some country or another. While searching for a replacement pack in the small, generally un-noteworthy town of Timaru, I met a man who owned a crystal shop with a 7-foot-high amethyst7-foot-high amethyst with a sign encouraging visitors to touch and feel its energy. When he didn’t have the deck, he recommended I try a shop in Queenstown – where I was able to purchase the last deck of the cards I liked.

Later at the hostel, I read the cards for a woman in the bunk next to mine. As I was doing so, I realized that I was serving as her angel. My roots were helping to hold her up, as well. I am traveling with a young Australian woman, whose schedule matched mine and was willing to chip in on the costs of petrol and the rental car. Just as I was her angel,

Angels have a lot to teach us, if we are willing to listen and ask. Never doubt that angels are all around you!

allowing her to see areas of the South Island of New Zealand that she might otherwise miss, she was also mine. She shared new music and made me laugh. Our roots intertwined.

Last night I was playing my ukulele on the grass outside yet another hostel. A group of men who had just completed a three-day trail walk in Te Anau asked if they could join me. As they shared their wine, they requested songs for me to play. I was happy to oblige. As I finished a song, one of them said, “That was, actually, brilliant.” His kind words will continue to bring energy to my singing for quite a while.

Angels are everywhere. If you have been one to me, all I can say is, simply, thank you.